Let us Reflect on the Events in the development of the place we call North Curl Surf Life saving Club. In 1919 North Curl Curl did not have laid on water, electricity, bitumen roads, telephone, sewerage and no road to the beach past Surf Road. You reached the beach by walking along the side of the lagoon from the bottom of Surf Road, or by a Council made basic walkway from the same starting point after you crossed the planked footway up to the height of the current beach roadway.

There were two wooden dressing sheds on the rise from the surf. The water supply was tank water from roof run off. Additional water came from a few brick and concrete wells. There was no transport between Curl Curl and Brookvale.

From 1920 things started to happen. Patrick O’Toole had the first shop built (General Store/Post Office).The main shopkeeper was his daughter Margaret (Ma Aldridge). “Uncle Pat”, as he was generally known, was involved in a daily morning trip from to Brookvale with a list of orders from shop customers for meat particularly, fruit and vegetables, to pick up mail from Brookvale P.O. and in addition, people wanting to get to Brook vale hitched a ride on his horse and cart, then to travel by tram from Brookvale to Manly and thence to the city All the roads were rock filled and certainly not smoot Uncle Pat and Mr Lock from Blackwood Road, formed a partnership and became the local Estate Agents. The next development was the building of the road by Warringah Council about 1922, from Surf Road to the beach, then by a bitumen surface on the road from Brookvale to the beach. Development in Bus Transport (reference below The Water Board pipeline from Brook vale to the beach came about 1925. Then came electricity and telephone. Over a period it meant the retirement of kerosene lamps, candles and water tanks Big events in 1932; the bridge across the lagoon, making of the football field (now a general sports area)

The name Curl Curl was probably an accidental variation of the same Aboriginal term “Curial Curial” which referred to the passage of man on the river of life Curl Curl appeared on the parish map as early as 1842 but it did not refer to the area north of Harbord, known as curl Curl today. Instead Curl Curl was the original name of Manly Lagoon and Curl Curl Headland referred to the headland at Queenscliff.

Why Curl Curl was moved north is not so clear but could have been connected with the naming of Queenscliff during the reign of Queen Victoria 1837-1901.

An early local reference to the northern part of Harbord Estate known as Curl Curl was made by resident Rose Hollaway in 1899 when she wrote of the wreckage on the beach Among the earliest settlers in the area about 1890 were the Sayce family who resided in Abbott Road opposite where the Youth Club and playing fields are today.

Mr. Sayce was one of the early bus drivers from Manly along Pittwater Road The Sayce property was like a country farmyard with pigs, fowls, ducks etc. other early settlers among whom were the Harry Hornes family in 1903, the Macklins, Reynolds, Mitchells, Bensons, OTooles, Woods and Yiebers.

The beach in those early days had to be reached by a bush track and was very secluded, and regarded as reasonably safe.

Early rescues were effected by local residents who kep no records of the events. People who were mentioned in early rescues were the O’Toole family and the Martin brothers who are said to have spent their weekends in caves on the cliff face east of todays clubhouse.

In 1921 after heavy rain the lagoon flooded and it was necessary to open the lagoon, which resulted in a large volume of water making its way out to sea. Unfortunately a young lad by the name of Pfeiffer from Harbord was caught in the current and washed out to sea. Len Boyt dived in but was unable to reach him. Harry Dixon manned a belt and line which was secured to rocks at the northern end of the beach. Unfortunately the gear was not good enough to save his life. It was then that the people of North Curl Curl decided that we should have a surf club and a meeting was called at Mr. Macklins place in Sur and a club was duly formed It consisted of the following names: Harry Dixon, Jack and Harold Hirsch, George and Alan Langford, Bill and Charlie Martin, Pat Otoole Snr. and Jnr, Tom oToole  Snr., George and Leonard Boyt, George Sayce Snr. and Jnr., Lew Climo, Horace Macklin, Les Wood, PopGrew, Charlie and Tom Grew, Pat Aldridge Snr., Rupert Chapman, Jack and Doug Clarke, Scotty and Fred McMillan.

The officers of the Club arranged for loan of gear from South Curl Curl and the first President, Mr. Herbert V. Macklin was elected on 3rd November 1922.

In those days the lagoon reached back to Harbord Road and when full was very deep in parts. Children used to sail canoes and boats on the lagoon, which was very clean and almost entirely sand bottomed

The lagoon was said to have been almost 300 yds. wide in places and when full contained an enormous volume of water. When the sand bank at the entrance was washed away this huge volume of water would rush seaward. It was this pressure of water which washed the Pfeiffer boy out to Sea.

A fund-raising dance to form the original club was held on the verandah of Mr. Clarks home in Austin Avenue. The sum of 5 pounds was raised which in those days was a considerable amount of money. From this money, galvanised iron sheets and old 3 2 2 hardwood was purchased from a builder at Brookvale. To get the materials to the beach an old, flat bottomed punt towned by George Sayce was used to transport these materials to the beach area. Another means of transport was to encourage the local children to swim behind the planks of wood and floated them down the lagoon.

A Small building was then erected onthe beach just around the west where the old boat shed is today. This was built by George Sayce , with the assistance from the members and the there families.

The Clubs first bronze Squad gained their awards on the 17th December 1922. The squad comprised 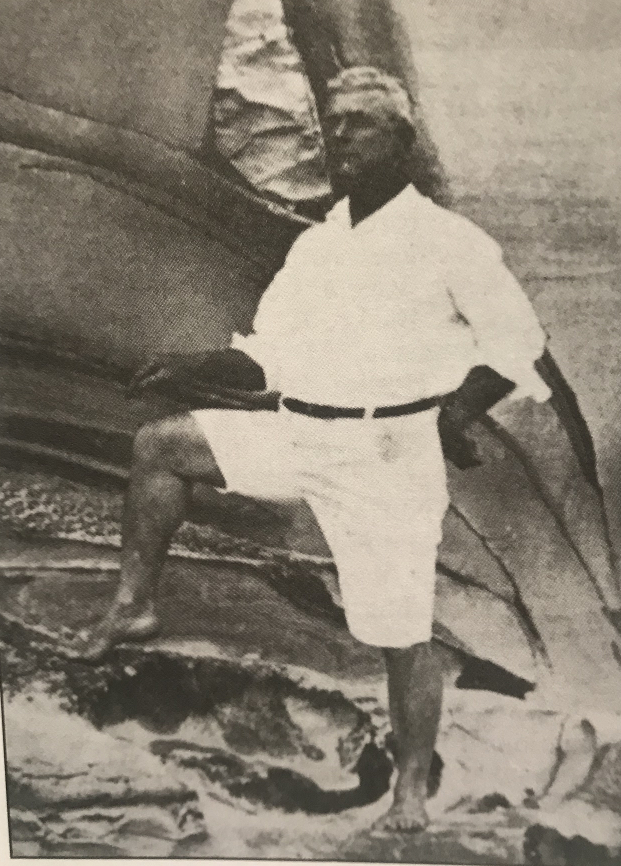 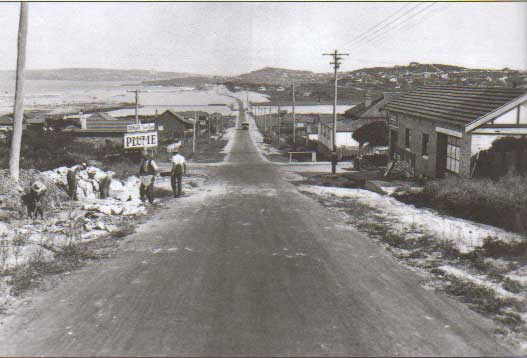 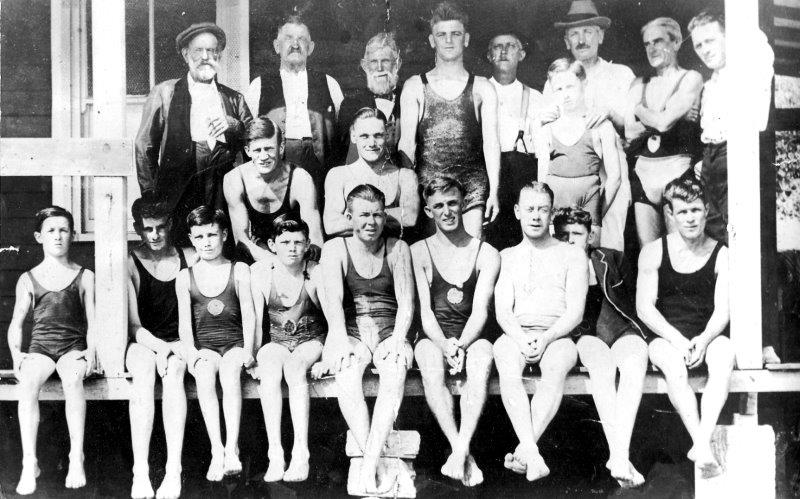 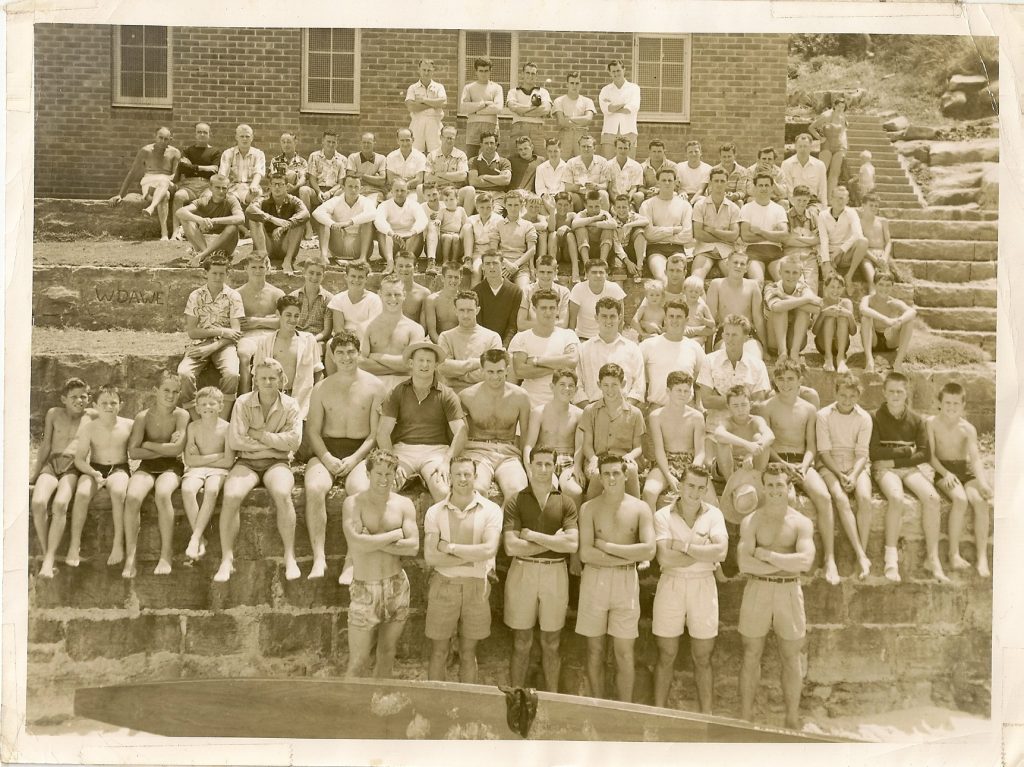 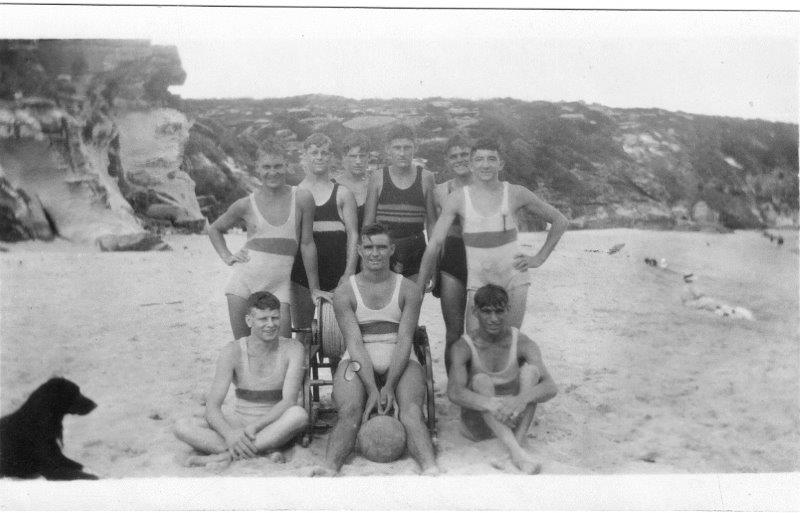 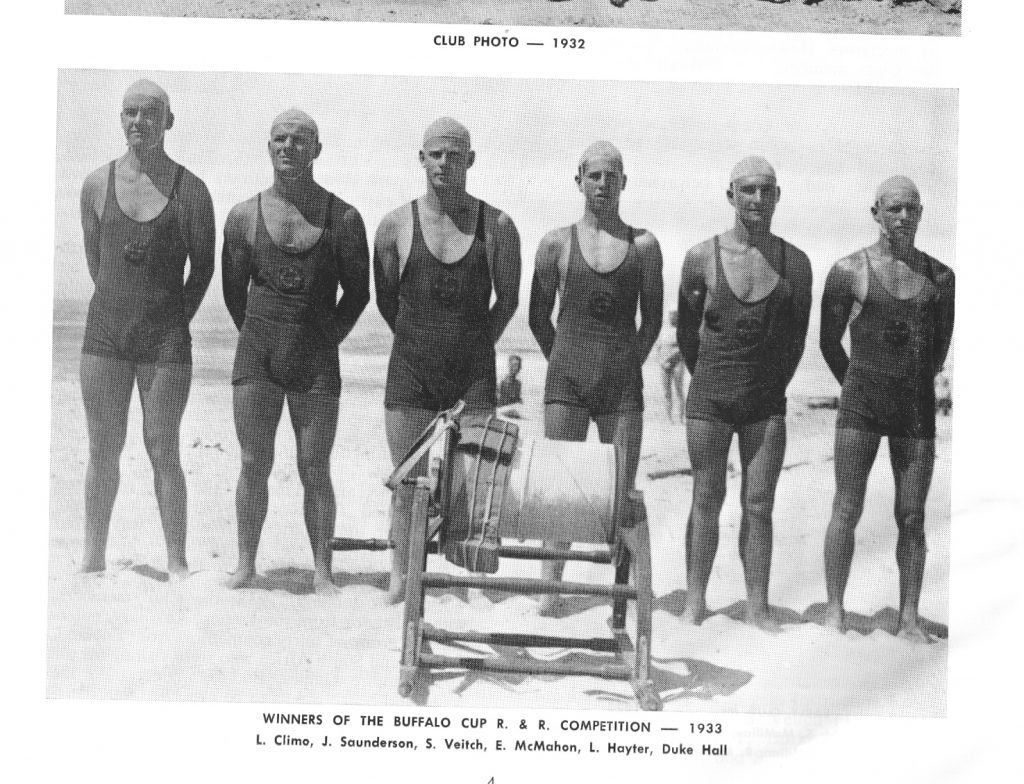